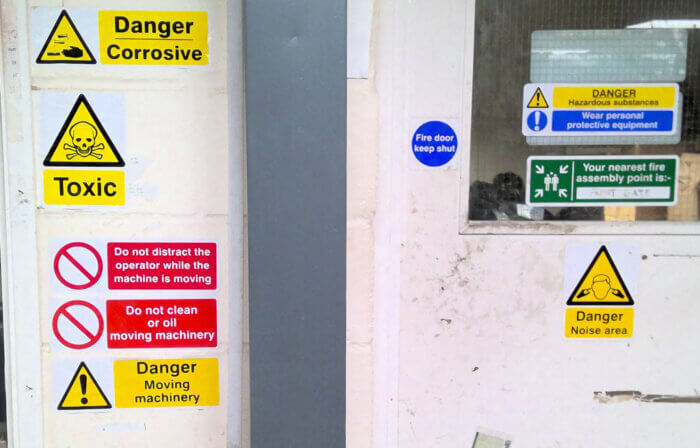 When people are unsure of what they need to do, they often grasp the easiest thing on the basis of ‘well, it’s something, at least…it’s a start’

Thus, consultants see on their travels workplaces which have virtually no H&S systems to speak of but who are festooned with safety signs.

It’s either confusion about what to do, or an impulse to wallpaper the workplace with so many instructions that if something goes wrong, they’re sure to find a sign they put up that says it was forbidden.

That this effort is some effort, whatever the motivation, could spur some people to be sympathetic to this approach.

But, in law, ignorance is no defence…so thinking the law just says ‘put up some signs, and you’ll be alright’ is not going to wash when something goes wrong.

Management are also responsible for actively monitoring, supervising etc., so if signs are repeatedly ignored then why is it that this is being tolerated?

On the other non-legalistic side, what about the nature of human beings?

If you know anyone who pays attention to a set of confusingly plastered cautions/prohibitions and restrictions they will probably be considered by their friends to ‘have a problem’.

The real problem lies with the management of the workplace.

People are often surprised when I tell them that H&S training is considered as one of the least effective of risk controls. However, having been a trainer – this is spot on. Trainees primary motivation in H&S training is to make it to the end of the course without getting too bored and to ‘pass’ the ‘everyone gets through this’ test at the end. Putting the learning into practice later on just becomes forgotten about unless there is organised, consistent follow-through.

The same point can apply to signs. Signs and notices can be even less effective as ‘cognisant controls’ than training, for the reasons mentioned above and their potential for confusion. Often, people are confused when verbally challenged to do what a sign is commanding them to do – they’ve just got so used to ignoring the sign.

Some signs are mandated

Sure, if there’s a fire you’d follow signs in an unfamiliar environment to lead you to safety. But those signs are mandated by law and thus have a very distinctive appearance.

It comes back to caring about how things look to others, and intelligently managing H&S that takes into consideration actual people with all their strengths and fallibilities.

When I worked for a national H&S consultancy, the phrase I often heard from other disillusioned consultants was: ‘If there’s a complex way to manage H&S, our Company will find it’.

In hindsight, that was flattering to the Company in that it implies that it lead to a way of managing H&S! (it didn’t).

H&S is – on the face of it – complex. Amazon, Google, Facebook etc. are also complex. It matters not whether things have hidden complexity, what matters is that the ‘user’ (client) finds it acceptably achievable to understand and use the system to their advantage.

This is the job of the H&S consultant – and if workplaces consider that all they need to do is to put up a few signs, then we’ve failed to communicate our message.

Often a sign, or group of signs is put and those staff members following don’t feel they have the authority to take down signs. There’s an underlying doubt that they could be making things less safe.

If can sometimes be useful to ask a H&S consultant and to calm those anxieties.

The best trick is to mentally imagine there were no signs at all. Then ask: which one’s are mandatory, and only then, which one’s would you insist on putting back up?

Signs need to give good, clear direction to anyone quickly reading it and not be cluttered visually by other, needless ones.

Indiscriminate use of safety signs just become ‘wallpaper’, losing their impact over time as well as physically fading and collecting dirt.

We all have to realise that signs have limitations, and they are not a handy substitute for a lack of knowledge about what you are trying to achieve – confident and thorough H&S risk management in your workplace.