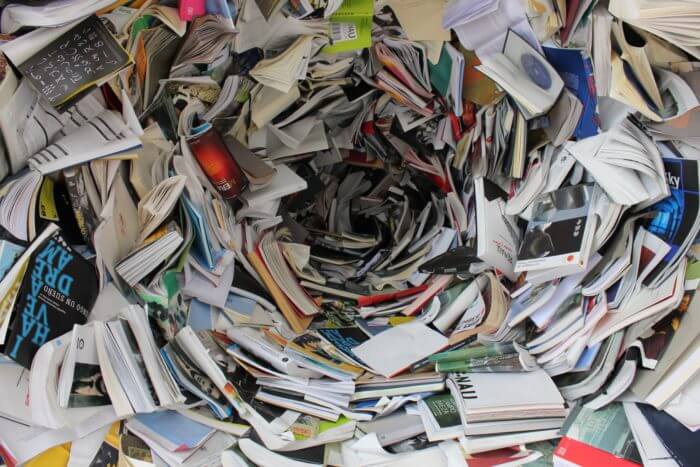 A recent visit to a factory (yes, we still have a few left in this country) got me thinking about what the H&S Practitioners view should be of general ‘clutter’.

In one large area there was so much assorted clutter that it was a challenge to know what to write in the report, perhaps, assuming the expected haughty tone, and using as many long words as possible:

‘The large accumulation of assorted items represents a general hazard to personnel and its continued presence might be said to be in contravention of Section 9 of the ‘Workplace (Health, Safety and Welfare) Regulations (as amended).

In my opinion that would that sound too much like your Mum saying ‘If you don’t tidy your room, I’ll tell your Dad when he comes home’. In fact I remember complaining to my Mum on such occasions ‘Mum, It IS tidy’, and similarly I suspect that when businesses get cluttered they know where the important stuff is and so can’t see the potential hazards for anyone else.

Obviously if H&S inspections are going to influence people to change because we think clutter is a H&S problem, we’d need to be more specific about the potential hazards – without being drawn into a debate with the manager as to the minutia i.e. where everything should go or how exactly they should do their job. If they want a materials/systems approach then they could always consider calling someone in to instigate a ‘Lean business or 5S approach’.

So, what’s wrong with a cluttered up business?

How about the potential for:

The last of the above hazard examples might be the one that is the most realistic, but the easiest for the clutter-lover to scoff at as it’s consequential on the exact circumstances.

It’s at this point that some MD’s seek an easy solution – often saying ‘well, it’s only me that goes in that area’…that’s pretty weak as even MD’s get sick or go on holidays leaving others to use their initiative and fall into their unintended traps.

And why all the clutter in the first place?

The obvious reasons are due to a lack of time to sort it out (so it gets put in one corner), or worrying that if you throw something out you’ll only discover you need it the next day. Sometimes it’s also fear of incurring cost e.g. with a large piece of equipment that’ll cost to get removed.

As all of these reasons stem from a fear of loss – lost time, losing something useful, losing cash etc., the H&S auditor needs to understand this and help the manger to rationalise an appropriate response e.g. by breaking tasks down into manageable chunks, showing that there’s a greater fear being silently generated by ignoring the situation (e.g. fear of an accident, claim, fire, etc.)

Overall, H&S Practitioners need to be seen to be hazard-focussed when compiling reports and sometimes put to one side their own personal bias – for either pristine workplaces or the style of business they would like to see (e.g. clean and ordered spaces, comfy seats, and cappuccinos-on-tap). It’s a tricky balance though – anyone involved in H&S wants to promote high standards at work, but at the same time they have to keep it real: it is after all a workplace, not a theme-park. Interfering too robustly can unintentionally cause friction, resistance, and discourage ownership – ultimately managers must take the initiative to improve their own environments.

So in my opinion, the H&S inspection in these circumstances should be challenging people to work out for themselves why it’s not great to have a cluttered workplace rather than chiding them for the mess they’re responsible for, which is very often the message in an inspection report.

And for business managers, the real challenge may be to not go on the defensive and to see that it’s better to have things pointed out now, during the inspection, rather than later from a solicitors letter or court summons.

if H&S inspections can’t link visible clutter to a hazard that everyone would agree is a realistic prospect, then we should either keep it to ourselves – or suggest a non-H&S reason for de-cluttering e.g. improving the flow of materials through the business, creating space by throwing unwanted things away, recycling, reducing staff time searching for things, improving staff morale, raising the organisation’s image to customers and of course impressing outside visitors…such as your Mum.